No Auditions Scheduled At This Time. Check Back Later For Updates 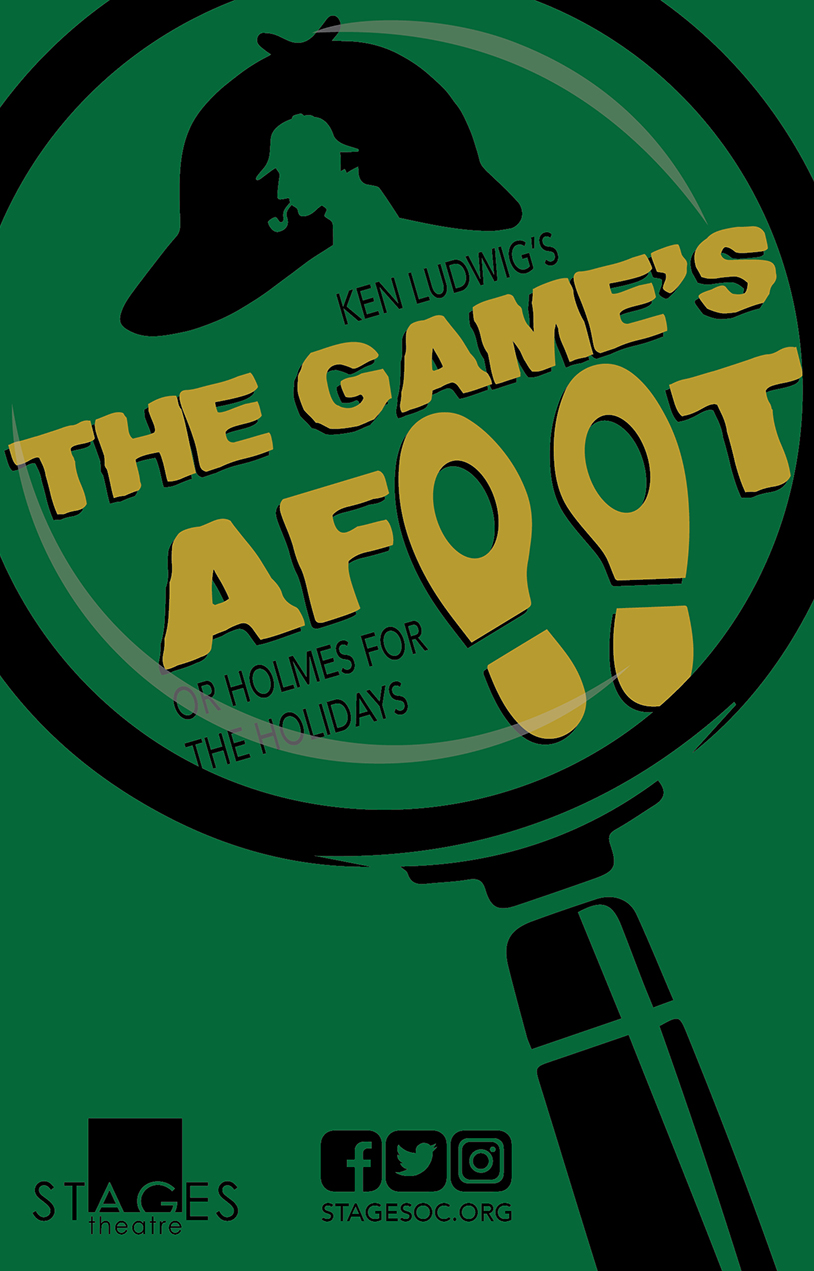 It is December 1936, and Broadway star William Gillette, admired the world over for his leading role in the play Sherlock Holmes, has invited his fellow cast members to his Connecticut castle for a weekend of revelry. But when one of the guests is stabbed to death, the festivities in this isolated house of tricks and mirrors quickly turn dangerous. It is then up to Gillette himself, as he assumes the persona of his beloved Holmes, to track down the killer before the next victim appears. The danger and hilarity are non-stop in this glittering whodunit set during the Christmas holidays.

Inspector Goring – Policewoman. 40s to 50s. British, eccentric, one minute wry and clever, the next off in a world of her own. 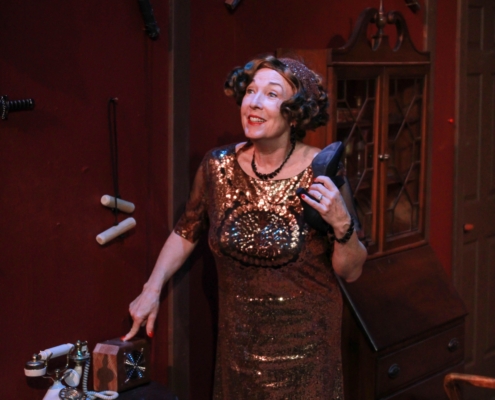 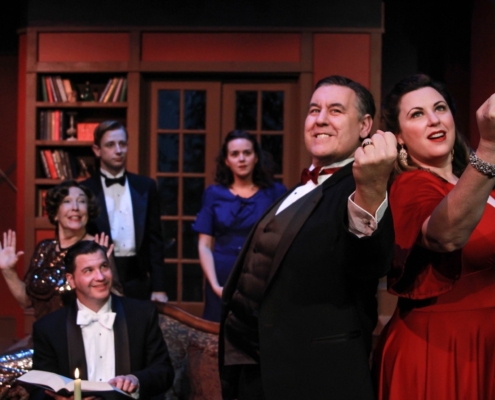 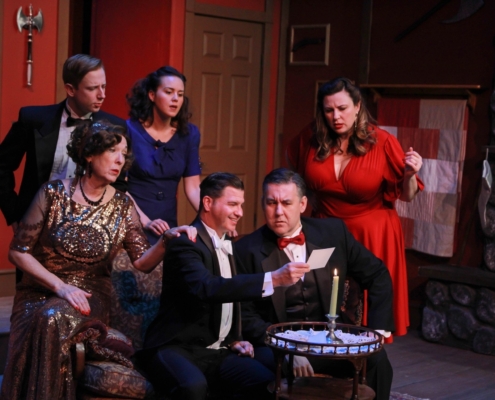 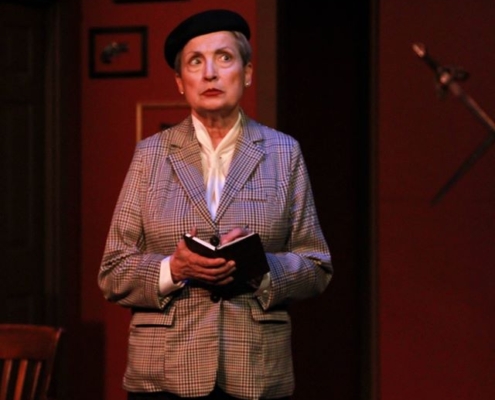 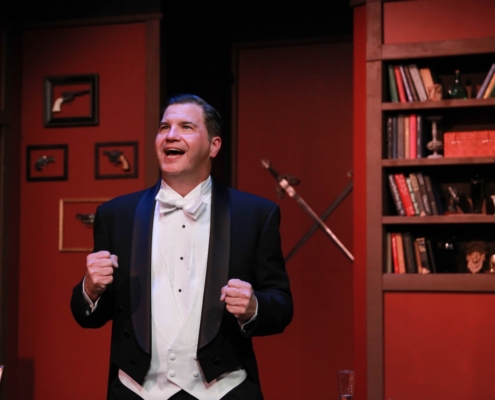 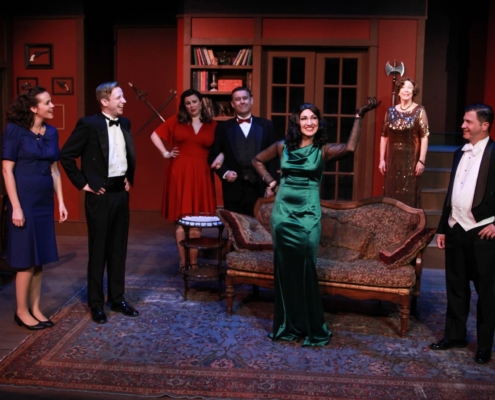 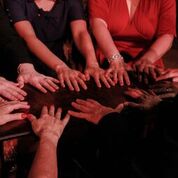 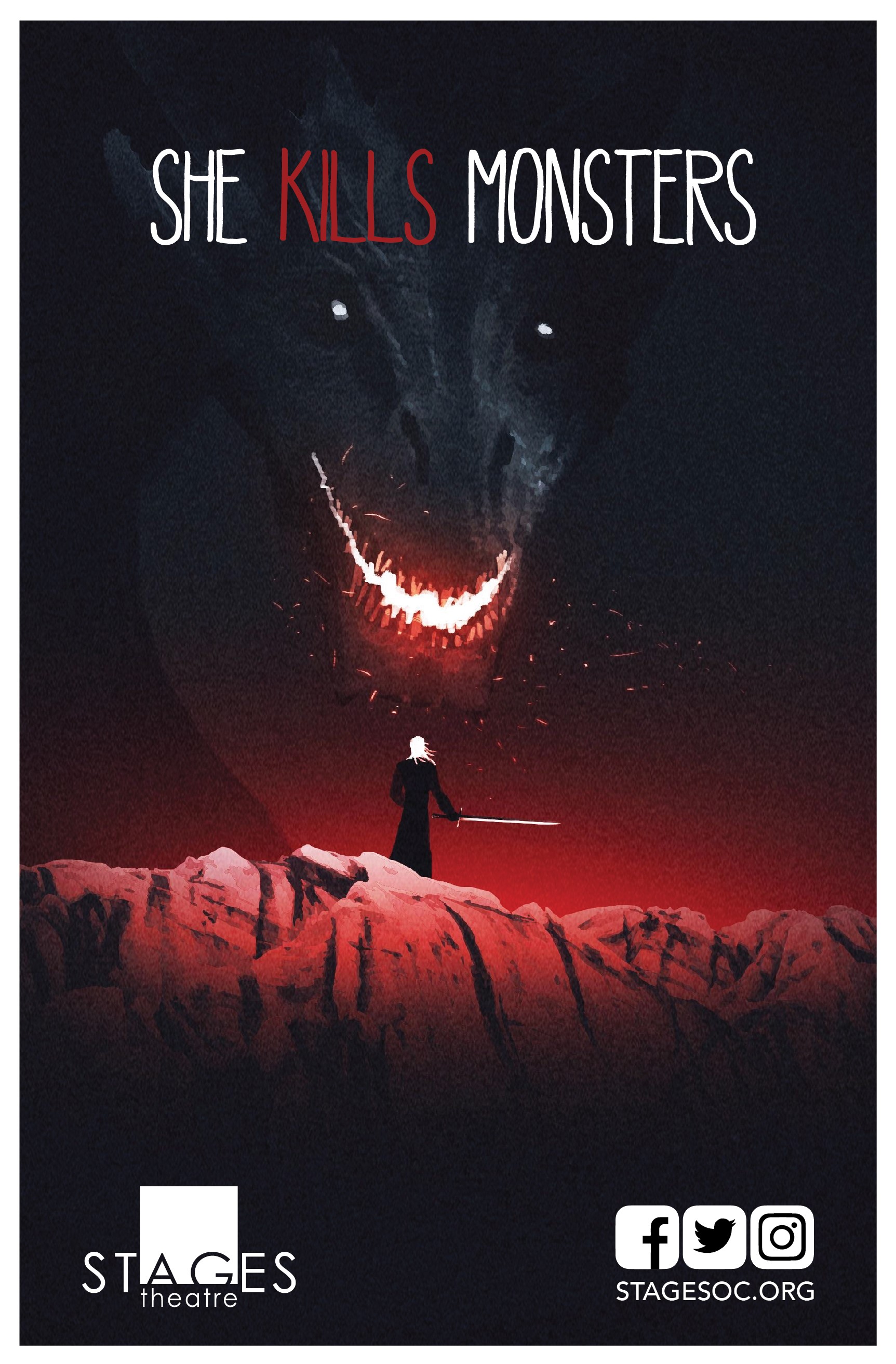 After the death of her teenage sister Tilly, Agnes discovers an untouched Dungeons and Dragons campaign in Tilly’s room. In an effort to connect with her sister one last time, Agnes enters the imaginary Dungeons and Dragons world she once mocked. On her quest, she uncovers levels of her sister that she didn’t know existed in an action-packed adventure filled with homicidal fairies, nasty ogres, and ‘90s pop culture. Along the way, Agnes discovers new friends, joys, and hard questions.

AUDITION REQUIREMENTS:
Bring headshot and resume. If you have Sides for cold readings will be provided at the auditions and also put up on the website for preview

TILLY EVANS (F, 16 – 18) A badass fantasy fanatic, nerdy, sarcastic, occasionally bullied and appears to Agnes after her death as a powerful level 20 Paladin. She may or may not like girls (ps she totally does)

ORCUS/RONNIE (M, 20 – 35 ) Overlord of the Underworld, a lazy demon that has given up defending his treasure in favor of watching TV and snacking on Easy Cheese.

KALIOPE/KELLY (F, 18 – 25) an athletic Dark Elf; master spellcaster; described as “rocking lady hotness.” The muscle of the group. Actor must be comfortable on stage with scantily clad clothing – think Xena, warrior princess-esque (Costumes not finalized though)

LILITH/LILLY (F, 18 – 25) A popular girl next door by day, heroic and sexy Demon Queen by night. Described as “the perfect combination of beauty and brawn.” Tilly’s in game girlfriend. Actor must be comfortable on stage with scantily clad clothing – think Xena, warrior princess-esque (Costumes not finalized though)

VERA (F, 19 – 25) guidance counselor; Agnes’s friend at the high school. Foul-mouthed and short-tempered. She’s not very good at her job but she’s very good at being a friend. WILL also play as several other characters.

STEVE (M, 16 – 19) A adventuring young lad who seems to get the butt end of the stick a lot. This role may be doubled.

Big plus if you are comfortable with or know stage combat, DnD rules and culture, a nerd of any sort.

Hi everyone! I wanted to take the time to tell you a bit about myself so you aren’t auditioning for a total stranger. She Kills Monster is a rather important play to me. It’s by one of my favorite playwrights in the world, Qui Nguyen. He’s a master in writing funny and hard-hitting plays. He’s a man before his time in that he was writing P.o.C-driven plays with female leads before it was “cool.” I can’t recommend his works enough. He’s an Asian-American, like me, and I think it’s important that the people who we haven’t heard from get the spotlight. My vision for She Kills Monsters is simple but definitely eccentric. I want to bring the whimsy and excitement of DnD to life and I’m looking for actors who are game (pun intended) to just explore and work hard. This show has critical value and brings issues that are important to me to the forefront. It provides representation to the people who deserve it now, more than ever. I will be the first to admit that I am definitely a funky director. If you work with me, you’re gonna be trying some crazy shit, doing even weird stuff, and I’ll probably dance in front of you when I have no idea what I’m trying to say. But, I do promise that I will listen to whatever you have to say, and I do my best to foster a familial camaraderie in all my shows. If any of this entices you, please audition. I promise to keep an open mind and I can’t wait to meet you all.

Sides for Vera and Agnes

Sides for Chuck and Agnes

Side for TIlly and Agnes 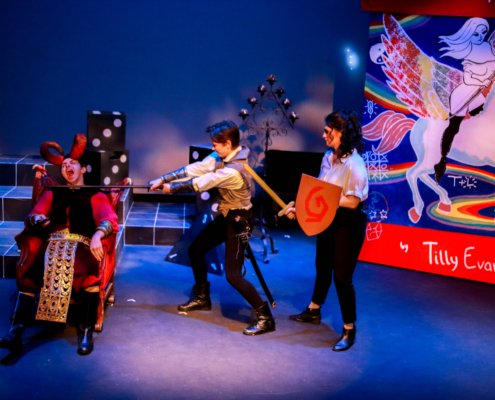 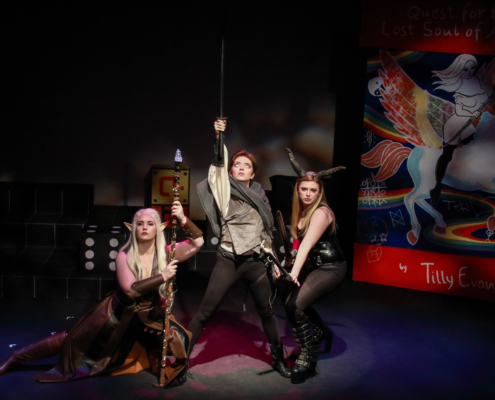 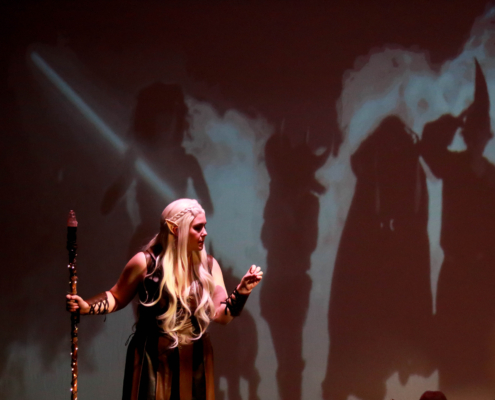 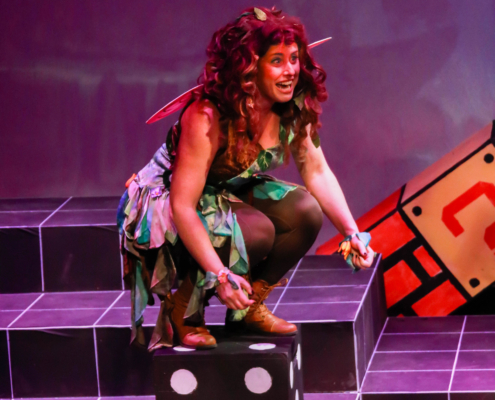 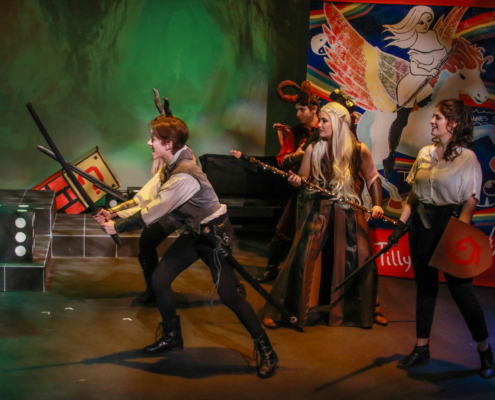 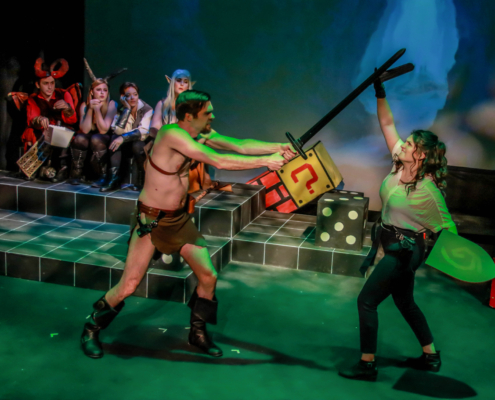 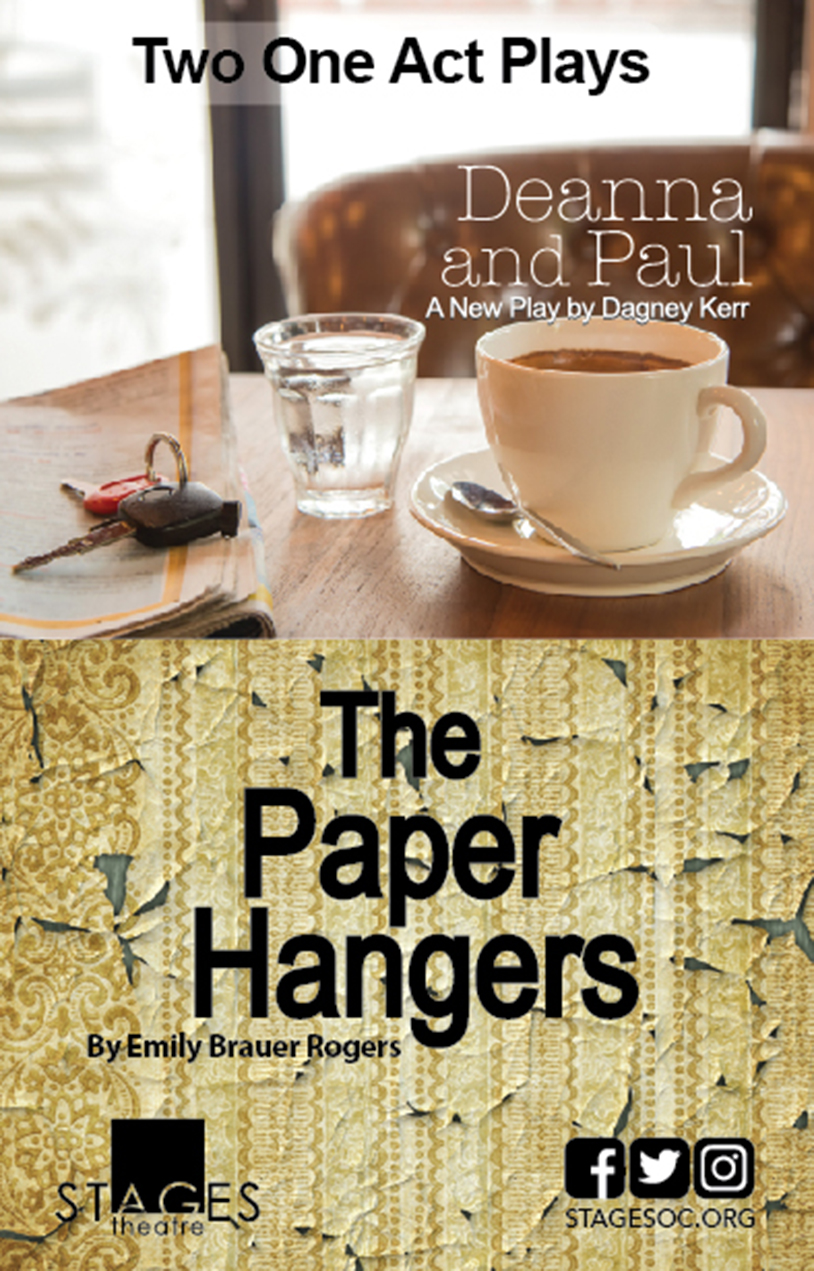 The Paper Hangers/Deanna and Paul

Deanna’s a quirky waitress with a strict no tipping policy. Paul’s a surly customer with a tight lid on his heart. Their lonely worlds collide one day in a small-town diner, where one cup of coffee can change everything.

Presented at the 2019 Page to Stage festival at the Curtis Theatre, in partnership with Project La Femme

New mother, Me, is overwhelmed. Brought to the countryside by her husband for rest and recuperation, the woman instead finds herself drawn to the verdant beauty beyond her window, yet is haunted within her isolated room by visions of who and what she might become. Based upon Charlotte Perkins Gilman’s “The Yellow Wallpaper,” The Paper Hangers takes a modern look at one woman’s struggle to deal with postpartum depression when society, her husband, and her mother expect the new mother to embrace motherhood and domesticity. Her attempt to reconcile this struggle may restore her, or may cost her everything.
Presented at the 2019 Page to Stage festival at the Curtis Theatre, in partnership with Project La Femme

Based upon Charlotte Perkins Gilman’s “The Yellow Wallpaper,” The Paper Hangers takes a modern look at one woman’s struggle to deal with postpartum depression when society, her husband, and her mother expect the new mother to embrace motherhood and domesticity.

While there are suggestions in the play of a contemporary setting, the situations
and relationships between characters often slip out of time and space; memory
and sensibility are both distant and internal, as well as intimate and fluid. Me’s
changing perceptions draw upon events all too concrete and those that may be
hallucinatory. Actors will play each given moment as their character’s present
truth, and should be comfortable with some intimate situations and movement.

Countryside: Female actor of color; late 20s-50s. Sensual and bursting with life, she’s literally the outdoors. Her life force draws both Me and John toward her.

Me:Female late 20s-40s. Any race/ethnicity. So overwhelmed and lost by her circumstances, she doesn’t even have a name. Eager to recover her former self and reclaim her life with John, but fearful of the form that life must take.

John: Male late 20s-40s. Husband to Me. Any race/ethnicity. Desperate to see Me restored to health, but growing weary, even impatient with the effort.

Mother: Female, 40s-70s, of an age to be Me’s mother, she is at turns sympathetic and critical, supportive and frustrated with Me’s condition.

Yellow: Non-binary. Any adult age. Any race/ethnicity. The personification of Yellow Wallpaper. Alternates between befriending Me and tormenting her in shifting guises of reality.

Deanna: 25 – 45. A sensitive spirit who see potential in everything. Must be able to whistle.

The Paper Hangers
Alt Side ME-COUNTRY

Deanna and Paul
Side 1 – Deanna side

Side 3 – Deanna and Paul 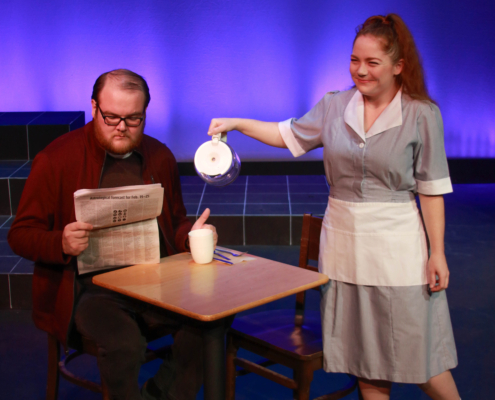 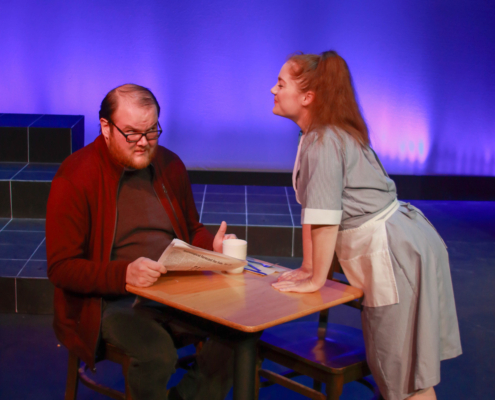 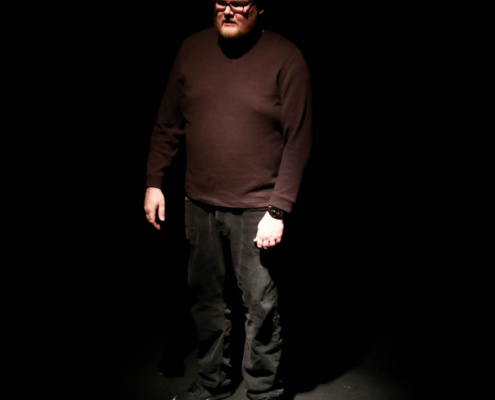 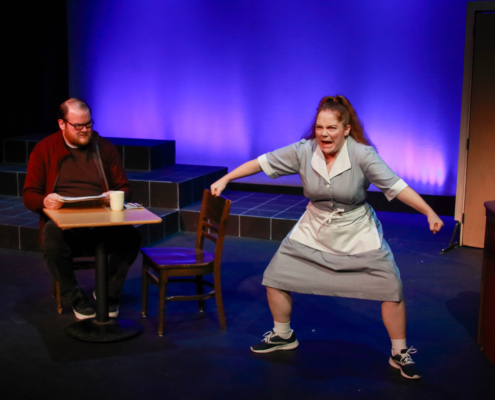 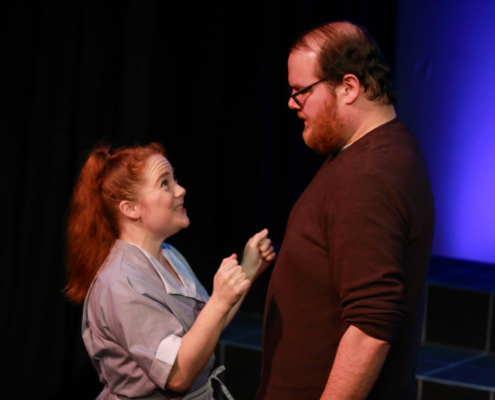 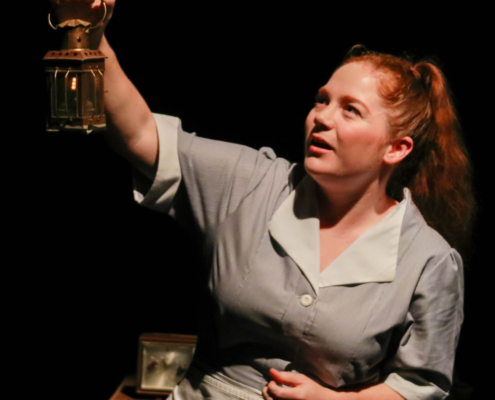 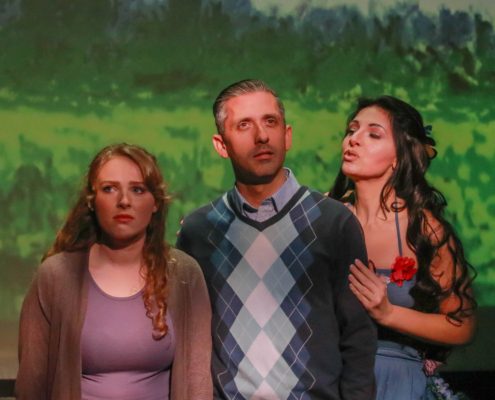 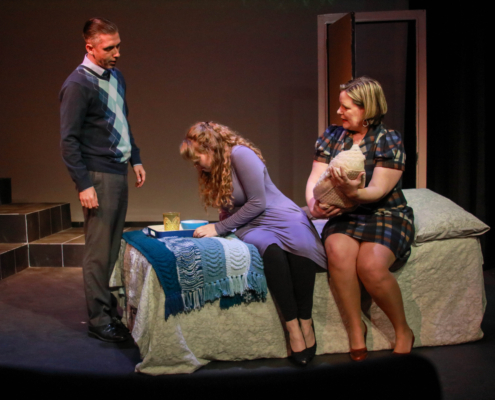 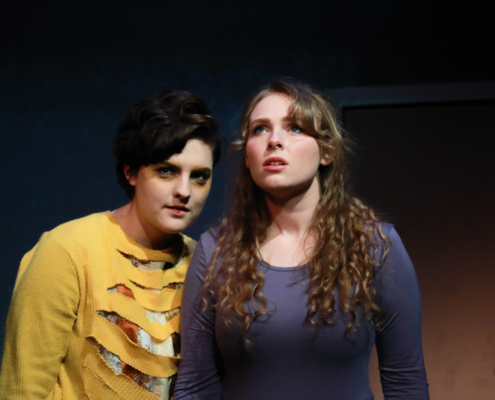 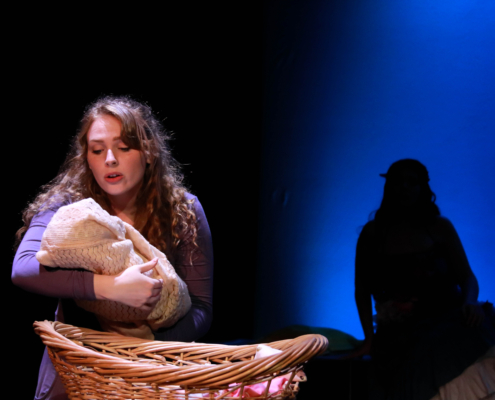 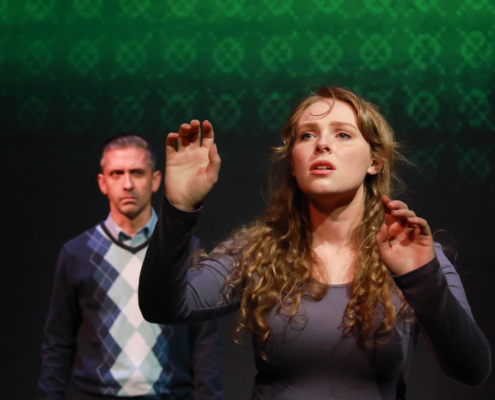